↓
Home→Techniques→Theory→Nanophotonics
A collaboration with the Computational Nonlinear and Quantum Optics group in the department to theoretically investigate the nano-scale interactions of light with matter.

The electromagnetic waves around a structure include the incident light, the internal standing waves and the energy leaving the structure.

This is a recently developed approach to solve Maxwell’s equations [1] on the surface of nano-structures, based on the idea of principal modes. These generalise the analytical Mie modes of spherical particles to describe arbitrary smooth boundaries and surfaces.

This approach is different from more numerical techniques such as Finite-difference time-domain (FDTD), as it decomposes the responses of the nano-system into sets of distinct pairs of optical modes.

The fields at the surface can be decomposed into unique pairs of modes, where one is spatially inside the structure and the other is outside. The two modes in the pair then interact on the surface. The surface integral on the boundary of the nano-structure is used to define the relative orientation in the two sub-spaces (internal and external), $$\int a^\ast \cdot b\;\mathrm{d}s = \langle a | b \rangle = |a| |b| \cos(\xi).$$ The combinations of modes with the smallest angles, i.e. the principal modes, are the sets that are most aligned between the two spaces. 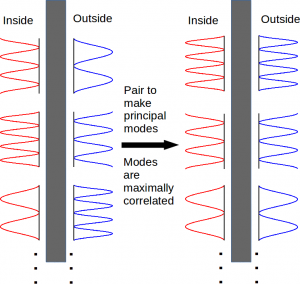 For each pair of modes, their correlation (or equivalently the principal angle \(\xi_n\)) gives information about their sensitivity to excitation by energy which couples to that pair (this is similar to phase matching in non-linear optics). This gives a geometric picture of the light interaction in that channel, and using some simple trigonometry, allows the amplitudes of the modes to be solved analytically. 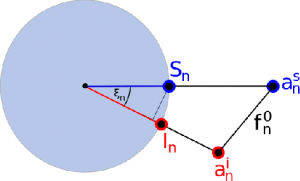 On the surface of the system the tangential parts of the incident, internal and scattered light obey $$\left| f_\perp^0 + f_\perp^{internal} – f_\perp^{scattered} \right| = 0$$ for each mode pair.

An example of using this information about the modes of a system to control its response to light [2] is shown below, where a resonance is actually due to two types of mode interfering together.

Simulated scattering spectra associated with two organ-pipe like modes of a gold nano-rod. The dipole-like mode provides most of the scattering, but the more oscillatory mode is where the resonance is occurring. The asymmetric total resonance (black trace) shows this Fano-resonance like  behaviour of a resonant and non-resonant mode interfering.

Applications of these modes are to find the optical density of states for quantum optics [3], or to understand non-local and non-linear optics of nano-structures [4, 5].